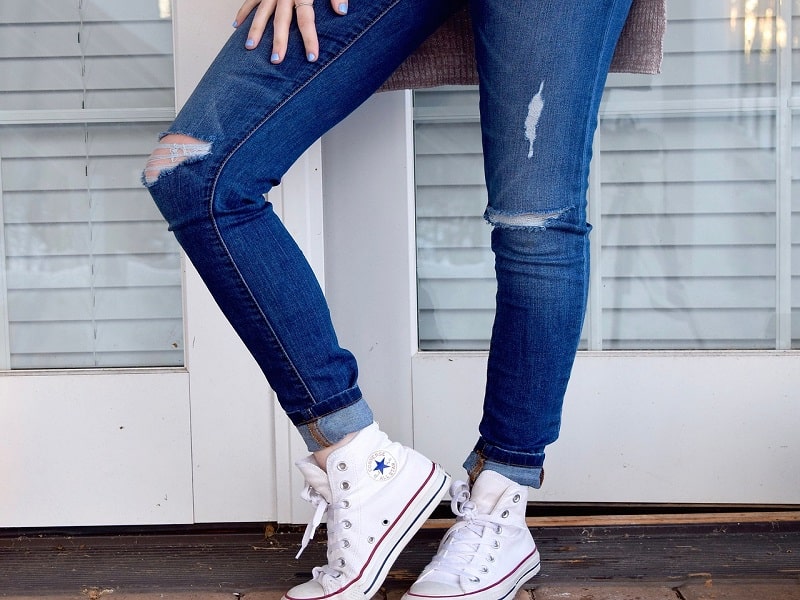 Ripped jeans are a type of denim jeans with tears, ripped knees, and other evidence of wear and tear. Ripped jeans were once thought to be a symptom of overuse. Poor or thrifty consumers might keep these faded or torn jeans instead of discarding them away. Ordinary ladies find the world of fashion perplexing. And every now and again, a trend emerges that appears to be completely absurd yet quickly gains popularity. Take, for example, the current craze for torn or ripped jeans. It is a pair of jeans with a torn, old look and noticeable torn places where the flesh peeps out, usually around the knees. Overuse can cause these tears, or they can be made at home with a blade or a pair of scissors in a DIY way.

The goal is to loosen the tightly woven fabric and expose the ragged ends. Ripped jeans were immensely popular during the late 1970s when the worldwide era was unraveling. Denim became the preferred language of communication for a huge segment of the world’s young who was dissatisfied with traditional society. Wrist straps, brooches, and ribbons were used to decorate denim pants and sweatshirts in the United Kingdom by outfits like denim. Torn jeans were associated with the anti-establishment sentiment.

Denim is ripped in one of two ways: with a laser or by hand. The former is preferred by low-cost brands that create large quantities of clothing, whereas the latter is preferred by high-end designers. A 2500W Laser Sharp Denim HD Abrasion System is the most often utilized equipment. The laser is directed towards the denim, which is fastened vertically against a metal backdrop, and it operates by burning holes according to a pattern specified by the software. Using chalk or a fabric marker, the pattern is first drawn on the denim. The holes are cut with big, blunt dressmaking shears (the bluntness helps the holes appear more natural), or a Dremel tool, which is a drill equipped with a piece of circular sandpaper that turns and gradually grinds a hole in the denim, for a more dramatic effect. Finally, using a fabric picker, the threads are pulled apart, fraying the cloth and giving it a genuine look.

By the 1970s, clothing had become a popular means of personal expression, with people wearing their clothes to convey everything from political views to religious convictions. Worn and ripped jeans were seen as a way of rebelling against or standing outside of the cultural mainstream by some groups. Distressed jeans are not always used as a fashion statement. Over-wearing was the cause of ripped jeans. Ripped jeans were mostly associated with the less fortunate prior to the 1970s. The bottom crust of the working class could not afford to part with their denim. Obviously, if a family is unable to afford new pants, they may continue to wear them past the point of personal pleasure. People have worn ripped garments out of need long before they were wearing tattered pants to display their particular style.

Ripped jeans remained a fashion statement linked with the rock and roll lifestyle throughout the 1980s. Frayed jeans, on the other hand, were gaining popularity and were being produced by designers. Most ripped and frayed jeans were formerly do-it-yourself efforts. They came in a variety of washes, including bleached, acid-washed, and stone-washed. Various parts of the clothing, including the pockets and derriere, had holes and rips. Ripped jeans are divided into three categories.

Denim pants having tears or rips, usually on the knees but often elsewhere on the trouser, are known as ripped jeans. Denim that has been worn and ripped is nevertheless fashionable, as it is still offered in stores and manipulated by customers. Torn jeans made a comeback in the early 2010s as a 90s revival, but they were also launched as Distressed identical to ripped jeans, but with the horizontal stitching point removed to make it seem distressed.

Ripped jeans have been fashionable for a long time. At first, many thought it was weird – torn jeans with loose threads and rips; it just did not feel right. But today it is a multibillion-dollar industry with well-known designer labels and celebrities on the front lines. Currently, ripped jeans are all the fashion. It never fails to astonish with these striking appearances, whether it is at the mall, at a packed event, or on the street. Some ripped jeans designers utilize the laser technique, in which the pattern is burned into the pants by a machine. The processing time was cut from 30 minutes to 90 seconds due to advancements, making the manufacture of these jeans considerably more efficient. To get the ripped effect, some people employ hand-ripping techniques. As they tear the denim by hand, a process that might take hours, their cuts is considerably more complex and precise. They achieve this by using a fabric marker or chalk to draw the design on the denim. After that, the incisions are precisely shaped with big, dull shears (the bluntness of the shears makes the rips look more natural).

Ripped jeans were popular in the 1970s and considered as a women’s fashion 6 ways to style cargo pants and flare pants. This political statement’s focus element was denim. In a word, ripped jeans are regular jeans with a variety of rips along the panel to give them. These fashionable incisions can be created with a laser or by hand. The goal is to relax the tightly woven cloth and allow the frayed ends to escape. Despite the fact that ripped jeans are now widely accessible, some people who want to save money or have a more real and unique look choose to wear torn jeans that they themselves ripped. Cutting holes in an old pair of jeans with scissors or a razor may give them a unique torn look. To help distress the jeans, you may use a sharp object, sandpaper, or even a chopping board. They may also be cleaned, washed, and dried to make the fraying seem more natural.